Racial Justice
Please provide event feedback on the form at the end of this page and a resource page lists the links and PDF's with additionaal information.

Check out the 'Resources' Page under Events for additional help and links to websites. 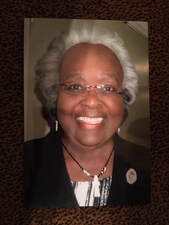 Jo Ann Lawson currently serves on the Racial Justice Charter Support team of United Women in Faith, representing the Western Jurisdictional area. She served as vice president and president of the California-Nevada Conference United Women in Faith (2008-2015). She has also served on the Pacific Regional School Team, the Annual Conference Session Planning Committee, the District Committee on Ordained Ministry and the Conference Board of Pensions of The United Methodist Church. In 1998, Lawson retired from a career with the Neighborhood Reinvestment Corporation, a national nonprofit organization chartered and funded by Congress since 1967, with the charge of revitalizing neighborhoods, providing affordable housing in middle- to low-income communities, leadership development and self-sufficiency through public/private partnerships.

​As director of the Pacific Region (Alaska, Hawaii, Washington, Oregon and California), she was responsible for funding, organizing, staffing and supporting the development of independent 501(c)(3) nonprofit, community-development agencies throughout the Pacific region. She staffed and managed a regional office in Oakland, as well as two field offices (Honolulu and Los Angeles). The home office of Neighborhood Reinvestment (currently Neighbor Works America) is based in Washington, D. C.

Prior to NRC, Lawson served as executive assistant to three mayors of Berkeley, California, over a period of 16 years. She is a member of Easter Hill UMC in Richmond, where she serves on the Worship Committee, Intercessory Prayer Ministry, Stewardship Committee and Endowment Committee, and also sings with the Voices of Easter Hill Choir. She also served as vice president on the UWF Western Jurisdiction Leadership Team (2016-2018). She is the wife of Rev. Phil Lawson, retired pastor of Easter Hill UMC, and has a daughter and a grandson.